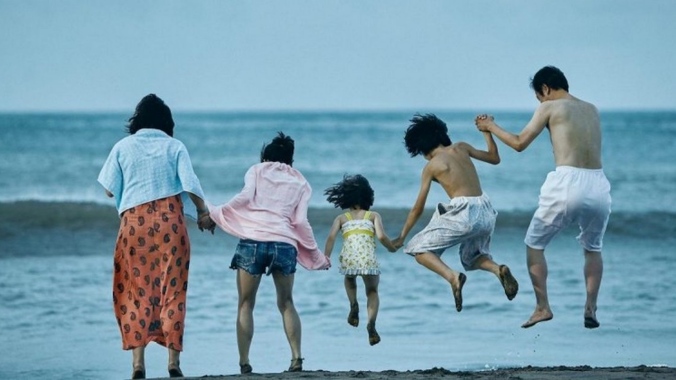 In the opening scene of Hirokazu Kore-Eda’s Shoplifters, a father and son commit the titular crime. They move quickly through a grocery market, mindful of lines of sight, slipping food quietly into a backpack and leaving without paying. In the next scene, the father stops to buy croquettes for himself and the boy—a spontaneous and lawful treat, spending what little money they have to celebrate nothing in particular. And there you have the duality that drives them: a mixture of generous spirit and disregard for social ethics. After all, the father might ask, how bad is a theft if its net impact is more good than harm? It’s thorny logic already, and it will become even thornier when, before long, they “shoplift” something altogether larger: a child.

She is a young girl, barely old enough to go to school, who has run away from an abusive home. They spot her huddling in the cold, and feeling that she’d be better off with them, they decide not to return her to her parents. What they can offer is a spot in a loving but particularly makeshift family. Crammed together in poverty, their exact genetic relations (or lack thereof) are teased out subtly, and any titles—father, son, sister, mother, grandmother—are unofficial enough to deserve asterisks.

But they get by, skimming extra money in ways that range from disreputable to illegal, all of which the film greets with a beautiful warmth, humor, and charity. The mother steals from her job at a laundry. The grandma grifts pension checks and lies to her wealthier relatives. The college-age sister performs at a peep show, where Kore-Eda is characteristically non-judgmental to both the women who work there and the men who pay them. And the son teaches his new “little sister” the art and science of petty larceny, even if he’s getting old enough to start to Figure Things Out for himself. This is a family’s worth of character arcs, but the film may be most closely defined by the endlessly cheerful father figure: a small, humble, even childish man who seems doggedly aware of every human weakness and shame and has determined to assuage them all. By the time they all have a lovely reverie on the beach, you might wonder how long such outlaw humanism can possibly last. How long before it contradicts or even betrays itself?

When they have to break a window to commit their next crime, even a single pane of shattered glass feels jarringly like a breach of their code. Twists, conflicts, and revelations tumble out from there, muddying the plot, which isn’t a good thing, but complicating the humanism, which is—especially since the film’s idealistic sympathy remains steadfast, even as its instability is exposed. Back home in Japan, the film has been a hit and a controversy. Over here, Kore-Eda’s patience alone would throw him into the arthouse corner, never mind the subtitles. But a lot of what he has to say (about the importance of family, the supremacy of love over blood ties, the lessons that children can teach adults) would be perfectly suited to anything made by Hollywood. What makes it delicate is the nature of his storytelling style, the way he doesn’t insist upon action so much as let the characters take root and then steadily grow into it. There are threads in Shoplifters that arise and resolve with the directness of a Dickensian melodrama, and others whose ideas float unanswered. The final shot returns to the girl, who by the end is in a more uncertain place than ever. It is a graceful coda. It resolves nothing at all. But its placement, and tentative calm, open the film to how much lies ahead.

Shoplifters won the Palme d’Or at Cannes and is up for Best Foreign Film at the Academy Awards this weekend. You can rent it now on iTunes.