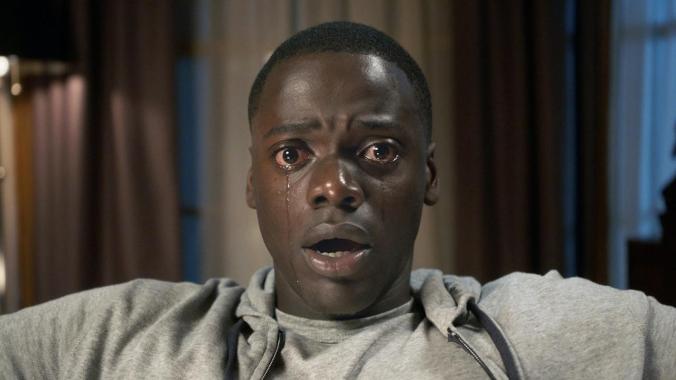 I have a very good reason for reviewing this now, when it hits home video, instead of when it was in theaters four months ago: I’m a coward. Despite having a taste for horror films, I rarely dare to tackle them blind on the big screen—although when it comes to jump-scares or gore, JordanPeele’s Get Out is actually very mild by today’s standards. It aims more for creepiness, and for the most underrated of horror movie qualities: actually being about something. The premise is something out of 2017 high-concept movie heaven: the film could be described both accurately and irresistibly as “Guess Who’s Coming to Dinner? meets Rosemary’s Baby,” in which a young black man (Daniel Kaluuya) gets taken to the country by his white girlfriend (Allison Williams) to meet her parents. Only, shortly after arriving, he begins to suspect that a sinister plot is afoot. The great coup of the first act is that it turns the welcoming smiles of upper-middle-class white liberals into something supremely off-putting, and I say that as one of them. (That’s the thing about white liberals; we can realize only too late, if at all, when we put somebody off). It is not a simple or easy choice of target, and the film works so well because Peele approaches it first as a friendly, cheeky satirist, and then as an earnest horror buff who knows how to hit all the story beats.

As for satire, keep your eye out and grin at the little details, like horror cinema’s best use of lacrosse sticks and croquet balls. As for horror itself, the film builds to that genre sweet spot where the end has full license to go insane without betraying the beginning. On the contrary, the bizarro details fall into place. Williams is the wild card every conspiracy needs, and Kaluuya effectively communicates a character who, when placed in situations where he’s the only black man in sight, has long since been conditioned to not say what he’s really thinking. I wouldn’t dream of spoiling where it goes, except to say that the ending has been criticized as a copout to the crowd. Personally, I think it just comes along at a time and for an audience where pleasing the crowd and posing provocative questions are one and the same. (Without revealing too much, one of its most fascinating threads is how racial dominance isn’t exactly the primary motive of the villains’ plan; rather, an inherent sense of superiority and misunderstanding is simply baked into how they pursue other goals). The film is not without flaws. It could squeeze more tension from its middle hour, or find a better balance of tones between conspiracy and comic relief. But it is a thoughtful, resonant midnight movie, a weirdly funny but justifiably anxious political popcorn flick about the fear of losing yourself. This was the subject of Rosemary’s Baby too; not for nothing is the ultimate mastermind of Get Out named “Roman.” And if a man best known for sketch comedy seems a surprising choice to dive into the horror fray, consider that Peele understands that the secret weapon of Rosemary’s Baby, hiding in plain sight with every creepy smile, was always its mischievous sense of humor.

Get Out is available now on home video and for rental on Amazon/iTunes. Don’t hurt yourself by waiting for it to reach its SVOD window. 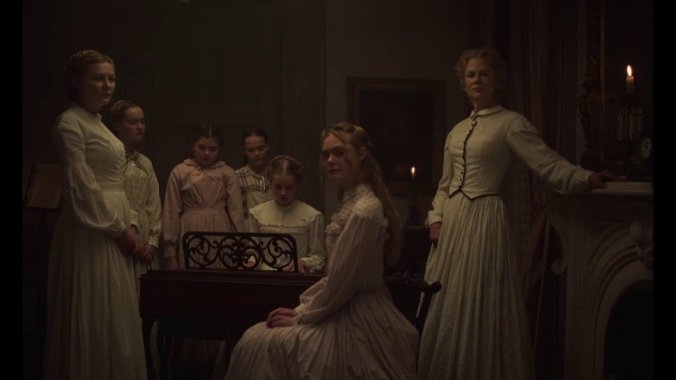 I have an internet connection and wasn’t at Cannes, so the attendant controversies and debates about Sofia Coppola’s new film reached me far before the film itself. Is Coppola a role model for female directors looking to challenge male-centered narratives, or more an example of Hollywood nepotism? Are critics talking about her film differently than if she were a man? Did she “feminize” the Clint Eastwood-Don Siegel original? What, in the context of cinema, does “feminize” even mean, and why should it have to sound like such a controversial word? And did Coppola whitewash history by not including the source material’s only black character, in a story set in the Civil War? The debates above—at least, those that are even worth having—deserve a longer article. Suffice it to say that a good deal of Hollywood history could have used more “feminization”, and the very real problem of Hollywood whitewashing is much more complicated when you’re talking about a film that, unlike, say, Lincoln (2012) or Gone With the Wind (1939), makes no claim to historiography. It’s not set in the South so much as it’s set in a psychosexual snow globe with weeping willows: a thin context papered over a largely unrelated allegory. Whether or not it’s alright to co-opt the aesthetic of an era but ditch its politics is (yet another) much larger debate. For now, I’d much rather discuss The Beguiled on its own merits, of which there’s plenty to recommend.

The film opens like a fairy tale, where a young girl from a nearby Southern seminary school ventures into the forest and discovers a wounded Union soldier, whom she brings home. The school is inhabited by a small group of women and touched with austerity. It could be next door to the boarding school in Picnic at Hanging Rock (1975) or on the sunnier, non-haunted side of the street from the Victorian manor in The Innocents (1961). In one of the film’s nicer atmospheric details, the war is never seen, just heard via distant rumbling from somewhere far beyond the gates. The divide between Union and Confederate—the time-period accents are iffy—is a dramatic trick, a way of evoking the otherness between men and women. And, pointedly, all the heroines at this school (Nicole Kidman, Kirsten Dunst, Elle Fanning, Oona Laurence) are at different stages of life. The film is empathetically tuned to how women in a sheltered place might react around men—fascination, attraction, confusion, fear, misplaced hope—as well as the secrets they might keep and quietly signal out. For what are the alternatives to secrets, except self-denial or throwing yourself forward? “Nous sommes des filles“, the girls are taught to say in a French lesson early in the film, and it makes a none-too-subtle mission statement for anyone with access to Google Translate.

Nicole Kidman’s unsentimental headmistress, in an act that wavers between jaded wisdom and icy repression, tries to keep everyone in check. Naturally, it’s the sort of gothic psychodrama that can only end in violence, and the sedate pace of the opening—potboiler material that isn’t treated like a potboiler—eventually finds a dreamy atmosphere for the final act to shatter. Material like this has been done many times, though knowing what I know of Don Siegel, I doubt his version of the same novel takes the idea of being young and “beguiled” seriously in the same way Coppola does, or arrives at the same conclusion about the bonds between women and the way men will always be outsiders to it. What holds Coppola back is that her characters feel strangely thin, their actions simple and monotone, creating a certain slightness. The material is fascinating, but to reach transcendence, it would need either more richly written characters or a more expressively deranged style. But as for flipping the male gaze, Coppola must be doing something right: in a film populated by women, the only character whom I could never quite get a bead on, never quite understand, is the man.

The Beguiled won the prize for Best Director at Cannes and is now playing at select theaters across the country. In front of me, a wife told her husband that she never reads reviews before going to the movies. Bless her.

“The first great film of the Trump Era,” says the trailer, quoting Yahoo! Movies. We’ll get to “great” in a moment; for now, the Trump Era is a good place to start. Supposedly, the script actually wasn’t based on Trump, but on that dentist who shot the lion and thus kicked off an internet firestorm of general disgust at the entitled attitudes of America’s wealthy. But while they filmed Beatriz at Dinner last summer, I wonder if screenwriter Mike White and director Miguel Arteta realized just how much the American Left would see even Mike fucking Pence as a step in the right direction by the time the film came out. And thus, for a summer of scandal and superheroes, we get a well-acted Sundance character piece where fate and the writer strand a lower-class Latina immigrant (Salma Hayek) at a painfully bourgeois dinner party with a crass right-wing real estate mogul (John Lithgow).

There can be something cathartic about dueling caricatures, even if the deck is stacked cheaply in your favor. (Chloë Sevigny, with whom I share an affluent white hometown, shows up to do a remorselessly funny parody of affluent white people). The film is being billed as something of a cringe comedy, or a “comedy of manners” where the manners barely disguise a fissure about to break open. There is a little bit of truth to that, and the cross-cutting juggles the characters in its dinner-party-from-hell with admirable deftness. But the film has something more somber than comedy on its mind, and that’s often to the film’s benefit: far too much, its cringes feel more like a sitcom pitch that writes itself rather than worldly, well-earned social commentary—which is to say that even when I laughed, I wasn’t proud of myself. The film is more interesting when it scrambles its own caricatures and delves into subtler, less antagonistic interactions and surprisingly philosophical territory. Hayek’s Beatriz is a naturopathic healer and ardent spiritualist, a strict believer in fate, past lives, and everything you could call either superstition or religion. Lithgow’s character—too articulate and reflective to be a parody of Trump—is a product of a purely cynical material world, a devil with a smile who isn’t evil so much as opportunistic. And it’s to the movie’s credit that neither Beatriz’s mysticism nor the privilege of her Newport Beach hosts seem attached to reality. So its best scenes aspire to dig below the surface friction of the Trump Era to address a larger question: how does one respond to a troubled world that doesn’t seem like it can possibly be fixed? Through blind faith? Through ignoring it? Through raging against it? Through capitalizing on it? This is heady material, to be sure, and it requires subtler satirists and better observers of human behavior than Arteta and White to do it justice, to make it feel like more than playacting in front of a camera. By the end, they, like Beatriz, have taken the easy way out. But stay tuned. The Trump Era is just getting started.

Beatriz at Dinner is now playing at select theaters. On the way out, I heard an old woman say “I thought it was supposed to be a funny movie.”