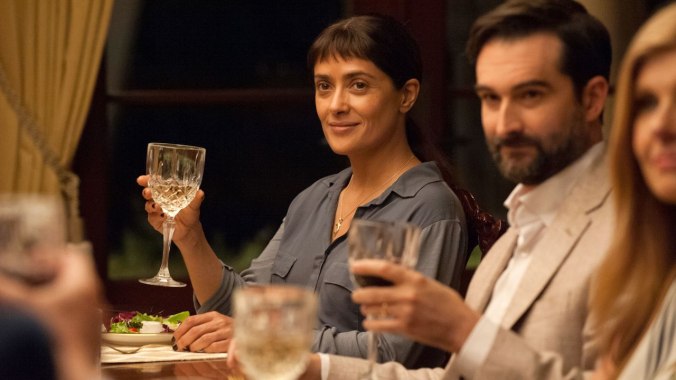 “The first great film of the Trump Era,” says the trailer, quoting Yahoo! Movies. We’ll get to “great” in a moment; for now, the Trump Era is a good place to start. Supposedly, the script actually wasn’t based on Trump, but on that dentist who shot the lion and thus kicked off an internet firestorm of general disgust at the entitled attitudes of America’s wealthy. But while they filmed Beatriz at Dinner last summer, I wonder if screenwriter Mike White and director Miguel Arteta realized just how much the American Left would see even Mike fucking Pence as a step in the right direction by the time the film came out. And thus, for a summer of scandal and superheroes, we get a well-acted Sundance character piece where fate and the writer strand a lower-class Latina immigrant (Salma Hayek) at a painfully bourgeois dinner party with a crass right-wing real estate mogul (John Lithgow).

There can be something cathartic about dueling caricatures, even if the deck is stacked cheaply in your favor. (Chloë Sevigny, with whom I share an affluent white hometown, shows up to do a remorselessly funny parody of affluent white people). The film is being billed as something of a cringe comedy, or a “comedy of manners” where the manners barely disguise a fissure about to break open. There is a little bit of truth to that, and the cross-cutting juggles the characters in its dinner-party-from-hell with admirable deftness. But the film has something more somber than comedy on its mind, and that’s often to the film’s benefit: far too much, its cringes feel more like a sitcom pitch that writes itself rather than worldly, well-earned social commentary—which is to say that even when I laughed, I wasn’t proud of myself. The film is more interesting when it scrambles its own caricatures and delves into subtler, less antagonistic interactions and surprisingly philosophical territory. Hayek’s Beatriz is a naturopathic healer and ardent spiritualist, a strict believer in fate, past lives, and everything you could call either superstition or religion. Lithgow’s character—too articulate and reflective to be a parody of Trump—is a product of a purely cynical material world, a devil with a smile who isn’t evil so much as opportunistic. And it’s to the movie’s credit that neither Beatriz’s mysticism nor the privilege of her Newport Beach hosts seem attached to reality. So its best scenes aspire to dig below the surface friction of the Trump Era to address a larger question: how does one respond to a troubled world that doesn’t seem like it can possibly be fixed? Through blind faith? Through ignoring it? Through raging against it? Through capitalizing on it? This is heady material, to be sure, and it requires subtler satirists and better observers of human behavior than Arteta and White to do it justice, to make it feel like more than playacting in front of a camera. By the end, they, like Beatriz, have taken the easy way out. But stay tuned. The Trump Era is just getting started.

Beatriz at Dinner is now playing at select theaters. On the way out, I heard an old woman say “I thought it was supposed to be a funny movie.”