Let’s go back in time about 8 years: as the Twilight movies reach peak cultural saturation, Kristen Stewart becomes a full-blown tabloid celebrity and is quickly memetized by the internet as the girl with a vacant stare, a tendency to bite her lower lip, and such a bland personality that it’s a wonder that Edward/Jacob/whoever want to fight over her. So it may surprise my college friends to hear that there’s a modest cinephile movement brewing—at least, in some corners—to claim her as a terrific talent. She recently set a record as the first American actress to win a César (the French Oscars), for her performance in Olivier Assayas’s excellent Clouds of Sils Maria (2014). And Assayas himself—an auteur’s auteur who has had a standing invite to Cannes since the 90s—called her nothing less than “the best actress of her generation.” Last year, the BAMcinématek in Brooklyn did a series on Stewart called “Bad Reputation”, an in-joke to the time Stewart played Joan Jett in The Runaways (2010) and a gentle encouragement for all the New York cinema hipsters to take the Twilight girl more seriously. I dipped into the series, and left feeling not that Stewart was a great actress, but that, at best, she’d been cast by some very talented directors. Film acting is a funny thing. The legendary director Robert Bresson, for instance, was famous for referring to his actors as “models”; that is, he picked performers, professional or non-professional, who had a look he could build a movie around. I don’t think Stewart can convincingly emote or consistently disappear into a character, but she does have a look. (Her best role—or at least, the one that most plays to her strengths—is in Kelly Reichardt’s Certain Women (2016)).

Now Assayas and Stewart have teamed up again for Personal Shopper, a film that got a divisive reaction at Cannes last year (some boos, some applause, and a top prize from the jury) and has quietly slipped into American theaters for the curious and the confused. And to be honest, I’m not sure the material is suited to either of them, even if it’s brave of them to try. The film is something of an arthouse ghost story, though most of all it exists to confound genre labels. Film is an art form where seemingly unrelated elements can be placed side by side and allowed to play off each other in coy, thematic ways. And so Stewart’s character gets two storylines: in the first, she’s the titular “shopper” (an invisible, poorly treated assistant) for a wealthy socialite in Paris, and in the second (stay with me here), she’s a medium trying to contact the soul of her dead twin brother. What do the two have to do with each other? The movie and its details offer food for thought, certainly—like the contrasts/parallels between hunting for ghosts and sending personal text messages to an anonymous stranger, or between being dead and working at the fringe of the red carpet, or between today’s hottest fashion and an unknown artist who stands the test of time. But Stewart comes across as fussy when she explains the spirit world, as if she doesn’t believe this bullshit herself, and Assayas’s ghost story itself spends most of the movie in limbo, somewhere between the compelling ridiculousness of a good B-movie and the serious tragedy that allows high-minded horror to pull it off. So the film is most successful when Stewart’s character is enigmatic rather than expressive, and when Assayas leaves you wondering which direction the film will go next, as it moves from horror to melodrama to meta-meditation to thriller and back to horror again. For those who like movies with details, it can keep you guessing right up to the moment you realize it leaves you with less than it wants.

After spending the previous two weeks communing with the big ape, I have a new piece on the MUBI Notebook on the legacy of King Kong and latest in a long line of Hollywood sequels-remakes-reimaginings-etc.: Jordan Vogt-Roberts’ Vietnam-inspired Kong: Skull Island, now in theaters. Enjoy!

Terrence Malick has made more films in this decade than he did in the four that preceded it, and it would be all too easy to say that his speed after The Tree of Life hasn’t done him any good. To the extent the movie-going world noticed them at all, 2012’s To the Wonder and 2015’s Knight of Cups divided the cultists from the workaday cinephiles and revealed the dangers of Malick’s working method. But in their defense, accusations of self-parody overlook not only what those movies actually have to say, but the way Malick is still evolving. So while the usual suspects will say he’s repeating himself, I say he’s searching. All the modern-day pilgrims that dot his newfound productivity make me see him as something of a pilgrim himself: working on variations of a theme, looking for a new kind of “Terrence Malick film”.

So here are the numbers on his latest film Song to Song, a drama (read: two-hour montage) about love triangles in the Austin music scene. It’s currently playing in 4 theaters in the country (to disappointing box office receipts). The theater I saw it at—a mall multiplex, of all places—was about 20% full, mostly older couples. And at least three couples walked out. Yet Song to Song does represent a progression, if not necessarily an improvement, on the films before it. For one, and unlike Knight of Cups or To the Wonder, Song to Song feels like a story first and a spiritual allegory second. It’s heavier on plot, and it contains his most interesting characters since Tree of Life, particularly Rooney Mara. He’s finding better ways to shoot the modern world, including a few captivating guerrilla filmmaking sequences. The confessional voice-over is more emotionally raw and less strained towards poetic grandiosity. And the looseness of his structure, when paired with the subject of youth, picks up a certain energy, as if Malick’s improvisational style were getting closer to the riffs and twirls of the New Wave. As his free-spirited young heroes dance, fuck, split, and get drawn by necessity back to the old-fashioned values they lack, it struck me that depending on how you read his attitude towards aimless bohemians—and there’s a lot of wiggle room—Malick’s moral philosophy could be a good deal simpler than his cinematic dexterity. But there are too many beautiful shots to name, and some of them, like a climactic long take of Mara and Ryan Gosling driving, provide an emotional catharsis better than conventional drama ever could. Those who hate Malick will see more of the same: a self-important editing brew not worth decoding. As for Malickians, they’ll shine to it. A new Malick film is no longer a continent of its own but a miniature piece of a larger whole. Here’s hoping he finds what he’s searching for. 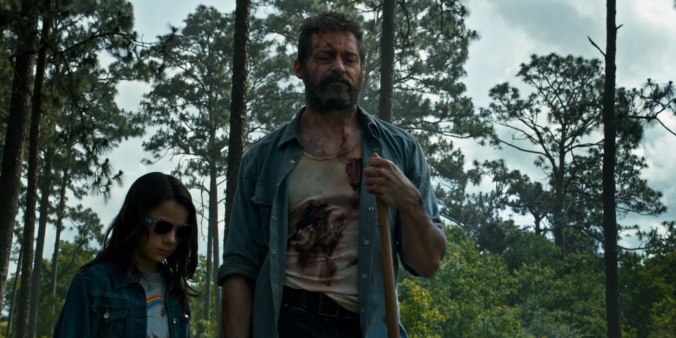 I lost track of how many Hugh Jackman Wolverine movies they’d made somewhere between 2009’s X-Men Origins: Wolverine and 2013’s just plain The Wolverine, and in the 17 years since it kicked off the superhero gold rush, the X-Men cinematic universe has expanded, split, and folded back on itself. But as one final berserker rage, Logan is satisfying for a good reason: it understands that, at a time when blockbuster heroes can get thrown through a wall without losing their breath, you can raise the stakes simply by making your characters vulnerable. Most comic book movies are bloodless in both the literal and poetic senses of the word, and Logan gets an emotional effect by showing you your favorite heroes as their bodies and minds deteriorate, not to mention the jarring feeling when they mix their old routines with words like “shit” and “fuck”. (It earns its R rating—I’m sure that aghast, confused parents abound). And this gets to the vagueness at the crux of the movie: Logan takes great pains to step outside its own franchise and say that the real world—or at least, the real world of Logan—isn’t like a comic book. In fact, it says so rather directly and repeatedly, and is littered with details of counter-programming: a no-superhero-names-allowed title, a stark setting, a small cast for a franchise that typically revolved around teamwork, an extended reference to the classic revisionist Western Shane (someone must have already written a think-piece comparing the two), a relatively minimal use of CGI spectacle, and lots of blood and dismemberment. But I’m not convinced that Logan really offers any true commentary or revision of the comic book movie. Its world isn’t any more “real” just because it throws around F-bombs and severed heads; all it does is swap one movie myth for another. (Howard Hawks for Sam Peckinpah, say). But as movie myths go, it’s an entertaining one. I’m sure someone involved played through The Last of Us.