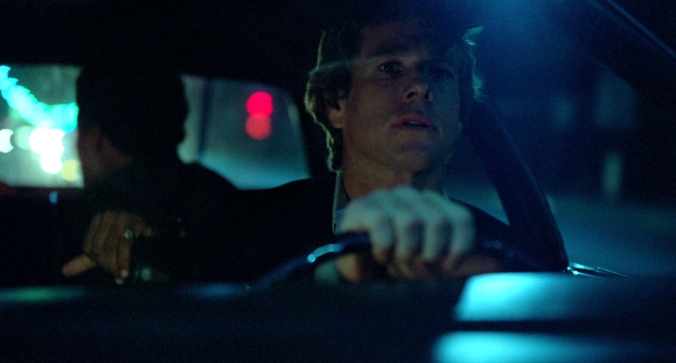 After it ended, Walter Hill took the stage at the Aero Theatre, looked out at the crowd, and said, “I think there are more people here tonight than who saw it in 1978.” The audience laughed. The film in question was The Driver, a 70s car chase cult classic that the Aero was playing as part of a series on Hill, with the man himself in person.

Even if you don’t know Walter Hill’s name, you know his work. As a director, he’s probably most famous for the enduring cult phenomenon of The Warriors (1979), whose version of a dystopian New York City continues to find fans for its mixture of savvy 70s cool (or is it camp?) and taut B-movie expertise. With the Eddie Murphy vehicle 48 Hrs. (1982), Hill did as much as anyone to set the pace for the buddy-cop movies of the 80s. As a producer and script doctor, he has his fingerprints all over the Alien franchise.

The Driver, released in 1978, was Hill’s second film as a director, and in cult fashion, it was a flop at the time. When the moderator asked Hill if it had been a blow to his career, Hill responded that he lucked out: by the time The Driver flopped, he had already begun shooting The Warriors, which became a hit. “In Hollywood, you’re as good as your last film,” Hill said, before adding, “In Europe, you’re as good as your best.”

I can’t speak to the ins and outs of European financing, though it’s certainly what kept David Lynch and Brian De Palma going as Hollywood lumbered into the 21st century. The occasion for this retrospective was the opening of Hill’s latest film, the gender-bending thriller The Assignment (2017), which barely got released here. But I can absolutely say that another place where you’re as good as your best film is rep houses like the Aero, where anyone who has signed a classic, let alone several, is always guaranteed a hero’s welcome. The night before, the Aero had shown The Warriors. I couldn’t make it, due to a cruel twist of scheduling. But given the large crowd that turned out for The Driver, it must have been a scene.

The Driver is action stripped bare, a seminal stepping stone in cinema’s continuing fascination with the adventures of a nameless, lonesome badass. Ryan O’Neal stars as a getaway driver—sharp, professional, cold, expensive, the best in the business—with Bruce Dern as the cop hell-bent on being the man to catch him. As the moderator was quick to note, the film seems to point the way to so much Hollywood genre cinema that followed. Michael Mann, for one: the strong and silent crooks-with-a-code of Heat (1995), Thief (1981), Collateral (2004), and on and on. Nicolas Winding Refn’s Drive (2011): at first overpraised, now over-bashed, and bowing reverently to what Hill was doing 30 years earlier. And Edgar Wright’s Baby Driver (2017), opening in theaters today with Wright on the record as a Hill fan.

But then, of course, there’s the tremendous debt The Driver owes to what came before it. Hill was quick and happy to note the influence of Jean-Pierre Melville’s classic neo-noir Le Samourai (1967), from which The Driver borrowed (or heisted) a few plot points and a sense of minimalist cool, and then seamlessly transplanted them to a neon L.A. “In the 70s, where we did have a lot of freedom, I thought the time had come to do a film like this,” Hill said after the show. “I guess I was right, but I was a little early.”

Thus partisans of The Driver can see it as one of those missing links between American and foreign genre cinema, the kind of smoldering action movie that’s big enough on emotional detachment and light enough on dialogue that it might make critics leap towards that word: “existential.” Ryan O’Neal is no Alain Delon, whose hitman moved through Paris like a fallen angel in Le Samourai. But then, when watching The Driver, you must thrill to Isabelle Adjani, a brief co-conspirator in one of O’Neal’s getaways and a fallen angel par excellence. The car chases are crisp, fluid, and thrilling. It proves that mounting cameras on cars, driving them through the night, and then making it all flow together in the editing room is still action at its most elemental. No pixel-storms are necessary. 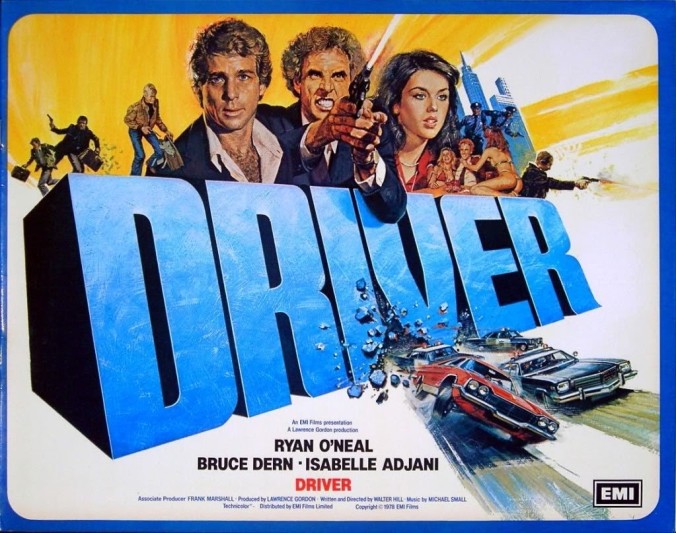 When discussing his favorite American influences, Hill singled out John Ford, Howard Hawks, and Raoul Walsh—a holy trinity for unpretentious, deceptively meaningful, masculine-but-not-macho Old Hollywood cinema if there ever was one. As luck would have it, Andrew Sarris once wrote a sentence uniting all three:

It’s here where The Driver takes a cue from noir by way of Melville: its character are driven by neither tradition, professionalism, nor adventure, per se, but by a sense of solitary antisocial obsession. Hill has, in the past, expressed a certain rejection of backstories and inner lives: his characters simply do what they do because that’s what they do. None of the characters in The Driver are even given a name. Ryan O’Neal’s “Driver” charges a lot for his services, but as the film notes, he doesn’t seem interested in spending any of it. Bruce Dern’s “Detective” isn’t particularly devoted to the idea of law and order, but rather to the thrill of the catch. The film’s first narrative coup is that it doesn’t resolve this conflict, but suggests that the game goes on forever: a symbiosis between cop and crook that will keep genre movies being pumped into theaters until cinema gives up the ghost.

The Driver‘s second narrative coup is how it handles its women. The women in a Hawks film like Only Angels Have Wings (1939), Rio Bravo (1959), or Hatari! (1962) are adventuresses. They can certainly keep up with the boys, but they’re ultimately also sentimental foils: they want their man to crack and admit he needs her. In The Driver, the women don’t need or want anybody; they’re walking their own solitary path, just like the men. There are hints of attraction between O’Neal and Adjani’s characters. But the film gives no release of showing either of them act on it, and you get the sense that if they did spend the night together, it would be under the silent understanding that each was doing it only for themselves. That leaves Ronee Blakley, excellent as O’Neal’s ganglord contact in the criminal underworld. It’s the sort of role that would typically go to a male character actor, but Hill said that he wanted “something a little different”, so here it goes against type to a country singer best known to moviegoers for her vulnerable star turn in Nashville (1975). Bruce Dern isn’t an actor I’ve ever associated with pure machismo, and when it comes to standard noir masculinity—stoicism, control, self-reliance, a rejection of sentimentality—the characters of Blakley and Adjani outstrip him. 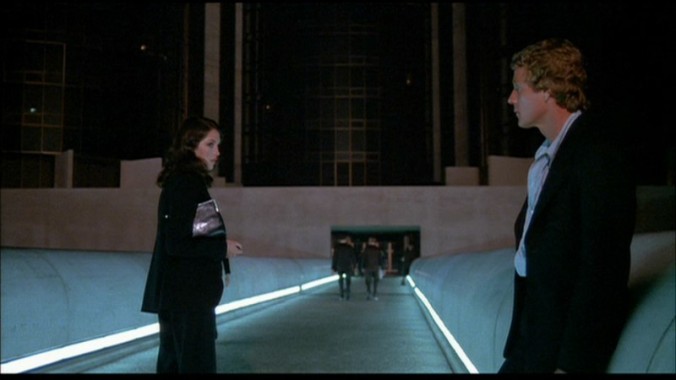 When it was time for the Q&A, I actually raised my hand to ask Hill why he chose to suggest chemistry between O’Neal and Adjani and not act on it. But then I immediately put my hand down, in part because the answer suddenly seemed obvious, but mainly because asking questions about anything as above-the-shoulders as a close subtextual reading seemed like it would completely kill the mood. Besides, I figured that any Fordian/Hawksian director worthy of the comparison wouldn’t give a straight answer anyway.

The evening was more a chance to sit and listen to a bona fide Hollywood war horse—amicable, grizzled, at ease—as he talked about his path through show business. He touched on his college days (“I wasn’t a particularly good student, but I never missed a party”). He talked about starting as a writer before jumping to the director’s chair (“I would read a lot of these Hollywood scripts….they all seemed to be written by the same person”). And he talked about an influential moment, when writer Alexander Jacobs showed him the script for the neo-noir classic Point Blank (1967): “It was exactly in the direction I wanted to go in. It was intelligent. It was an action movie. It had ideas in it.”

Indeed, the most overtly philosophical he got was when talking about the action genre itself. Discussing his attraction to it, he said:

To tell you the truth, I believe in the pluralistic cinema. I think musicals are great, and comedies are great. Most action movies aren’t any good. Most of them are dumb. [Appreciative laughter from the audience] But they’re popular for some very good reasons. They are kind of hymns to physical courage, which is something that doesn’t enter into most of our lives, but at the same time we always admire. Athletic heroes, I think, are part of that kind of instinct within all of us…Where the movies usually go very bad, it seems to me—and you can get this off the sports page too—is the transference of the idea that physical courage equates to being a good person. I like to get an ambivalence in.

But the centerpiece of the Q&A was when Hill talked about getting to direct his first film: the Charles Bronson boxing drama Hard Times (1975), the success of which led Hill and producer Larry Gordon to The Driver. Of Hard Times, Hill said that after he’d started to make money as a screenwriter, Gordon called him up and said, “Look, I’m going to pay you absolutely nothing. And I’ll also pay you nothing to direct the thing. But if you accept those conditions, we’ll make a little, low-budget movie. You’ll get a shot.” Hill immediately said yes. He called it “the best deal I ever made.”

When Hill told the story about his inspiration for Hard Times, it struck me as resonant of this deal—and of Hill’s cinema, of Hawks, of Ford, of Walsh, of The Driver, and of Hollywood itself. Even if the story itself was delivered as nothing more than a plainspoken anecdote. Hill said that his grandfather used to share stories about the Depression. His grandfather had worked on an oil rig, “a long way from the bright lights.” And on Sunday, their day off, his grandfather and the other drillers would drink, run races, have boxing matches, and place bets. One day, there came a stranger:

A guy shows up. He gets off the back of a truck. He’s a hobo. He watches one of these fights, and he comes over to my grandfather’s bunch and says, “You guys feed me and give me a place for a while, and I’ll fight for you and share some of your winnings.” They didn’t know what the hell to make of him. But they put him out there the next week, and he knocked the shit out of somebody. He fought for six weeks, won every fight, never said much. And then they woke up one day, and he was gone.

The audience laughed again. And there you have it.

The Driver is, sadly, not available on Netflix, Hulu, iTunes or Amazon streaming, thus proving that we should still value physical media. Track down a copy and have fun.