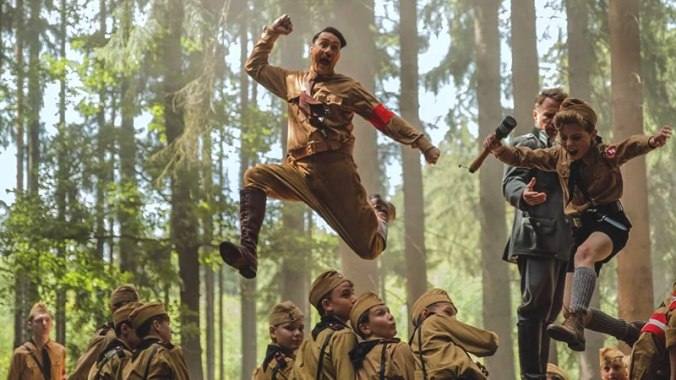 For all the ways Taika Waititi’s Jojo Rabbit looked immediately wrongheaded—everything some critics found kitschy and treacly about Life is Beautiful, multiplied by Wes Anderson—there was one moment in the ubiquitous internet ads that kind of tickled me. Rebel Wilson, as a Nazi schoolmarm, shouts “Kids, it’s time to burn some books!”, and a group of fresh-faced ten-year-old students jump up and cheer. Easy irreverence, certainly. But what underlies that laugh is a genuine observation: that the horrifying appeal of fascism is rooted in an urge that any red-blooded American boy might understand. And that needn’t be empty. It could be, you know…satire.

An “anti-hate satire” is how the promotions for Jojo Rabbit having been billing it—somewhat defensively, in fact, as if they’re afraid that a candy-colored comedy about a conflicted Nazi child and his imaginary-friend version of Hitler might otherwise scare families away. In truth, Jojo Rabbit isn’t really satire. Not many of its jokes are heady, dangerous, provocative, or incisive, or even try to be. It has very little to say about anti-Semitism (it’s bad) or World War II (it was rough), and honestly, the most startling thing about it is its political irrelevance. In a post-Charlottesville era, where a messy American brand of Naziism has felt emboldened to go public, poking fun at old school “Jews have horns” anti-Semitism and the military pomp of Hitler’s goons feels terrifyingly, cartoonishly obsolete. Waititi reportedly wrote the script in the early 2010s, and as Jojo Rabbit becomes an Oscar contender, I can’t tell if it’s to the film’s advantage or its detriment that the finished product came along now.

But it is very much worth noting what Jojo Rabbit does well, because its flaws gets to its virtues and vice-versa. Waititi has a valuable skill with kid’s-eye-view tenderness: the anxious, even morbid traditions of children’s literature, and the way children relate to parents, to each other, and to the idea of having to be a grown-up someday. When it operates in this vein, it’s so earnest, warm, and cuddlesome that cynicism would be unseemly. But whenever Jojo Rabbit asks its historical setting for something more grounded—that is, whenever its jokes or gut-punches require the stakes and complexities of WWII—it’s as much a dramatic mishmash and tonal mess as the cynics suspected. So in the end, all that its “just keep going” message really signifies is that history offers no trauma so traumatizing that you can’t eventually make a Jojo Rabbit about it: simplistic, goofy, whimsically aestheticized, a lot safer than it thinks, and unable or unwilling to touch past-tense history and present-tense politics. This is a movie that will process the Holocaust by throwing a David Bowie dance party, and if that sounds like toothless hipster myopia, you’re not far off.

But the result is not cynical itself; ironically, something like The Reader, which plays the material straight, feels much more calculated. Jojo Rabbit is more like a movie that a kid would dream up and then somehow get to make, and it may be that Waititi flourishes best in purely fantastical settings that adult scrutiny can’t touch. That impression is aided by the onscreen presence of the director himself, who plays the role of the buffoonish Hitler with total commitment, even when the wit and slapstick are spotty at best. You can call it a “saving grace” if you like. Either way, it’s the reason Jojo Rabbit deserves neither Oscars nor hate: for better, and for worse, Waititi does seem to be as innocent as his characters.

Jojo Rabbit is in theaters and up for Best Picture at the Golden Globes. For the Oscars, who knows what.