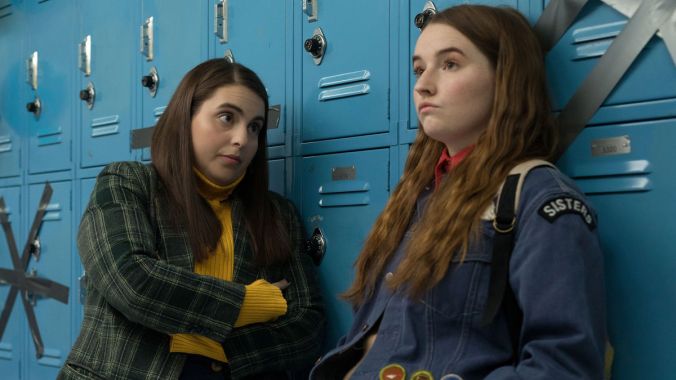 Meet the Class of 2019: the same old inarticulate confusions, now mixed in with new technology, careerisms, ideals/pretensions of social consciousness, and shifting gender norms. They can be monstrous, as everyone is at that age where you know less than you think but are well on track to inherit the earth anyway. But that monstrosity is a good starting point: in teen movie terms, the successfully ingratiating new comedy Booksmart is something like the salvation of Tracy Flick. Here, the Overachiever from Hell is reborn as Molly (Beanie Feldstein), a pathologically dedicated student who, along with her best friend Amy (Kaitlyn Dever), decides it’s time for both of them to cut loose and squeeze as much fun as possible out of high school before graduation day. This is not the novelistic accumulation of detail of Lady Bird, or the “let’s get real about right now” cringes of Eighth Grade, but an altogether poppier and simpler tradition: the raucous up-all-night teen comedy. This is also to say that there is absolutely nothing conceptually novel about Booksmart—and that doesn’t necessarily have to be a bad thing. Here is a generation that may point out, with fair cause, that the timelessness of American Graffiti is lily-white, that Sixteen Candles is rapey, and that Superbad only gives its raunchy, empathetic close-up to the boys. So why can’t these kids go for an up-all-night comedy of their own?

The director is the actress Olivia Wilde, marking her first feature behind the camera, and the film’s likable, somewhat anonymous energy shows a periodic urge to play: a stop-motion interlude, say, whose weirdness is meant to justify itself, or a rather graceful long take when the emotions call for it, or an underwater sequence in a swimming pool that does more for teen freedom than any property damage. Some of it can feel oddly out of sync, with its plot mischief and its tenderness not quite occupying the same plane. It leans heavily on the heroines’ chemistry: the film takes their charm and runs with it, letting them riff and flow between story points that have varying degrees of imagination.

But the charm is undeniable, and anxious industry reports have sprouted to ask why, despite strong reviews, it didn’t take off at the box office. Pick your poison. Did it need bigger names? Better marketing? Is it simply not raucous or clever enough to break through? Are its teen movie tropes just too dated for our insane 2019, no matter have many Gen-Z-isms you throw in? Is it more dire, that the market is drying up for Indiewood crowdpleasers? (J.J. Abrams thinks it might). Or is it something broader—that the very audience the film wants to be about doesn’t care that much about seeing themselves on the screen of a movie theater? Either way, Booksmart‘s problem, artistic and commercial, is falling short of a critical mass of urgency for adding another night to remember to the teen comedy pantheon, even if it shows the right underlying wisdom. Indeed, the film’s misadventures (which include arrests, drug trips, boat parties, and a last minute race to the podium) mostly fade away quickly, as if they were borrowed, used as directed, and now have to be returned. But its loveliest aspect, as well as its most urgent, is an idea that it warmly illustrates well before the big obligatory speech makes it plain: that the people in high school who seem to be on the other side of some invisible barrier, seen or gossiped about more than engaged, are actually pretty nice if you take the chance to talk to them. I hope the Class of 2020 learns that before too long.

Booksmart is still in theaters. Three years in a row with a worthy, female-driven coming-of-age comedy. Don’t jinx it.