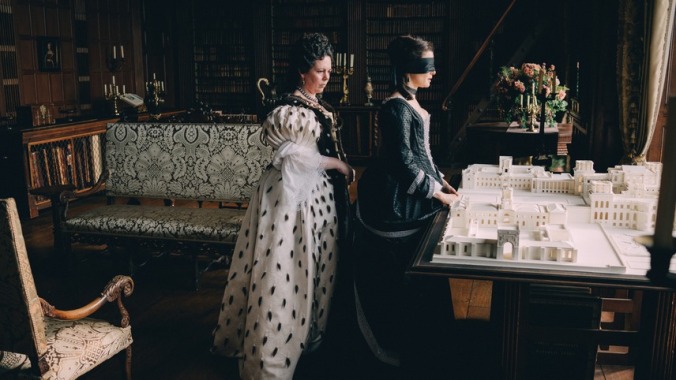 Over Thanksgiving, The Favourite arrived in American theaters with the strongest box office premiere of any limited release of 2018, and it’s been off to the races to since then. It comes as no surprise that Yorgos Lanthimos’s new film hit the ground running for awards season; I hadn’t seen it yet, but had been at the theater several times when the trailer played for an Oscar-inclined audience, and you could always feel the responsiveness. On the one hand, you had the sort of British period piece with familiar appeal but typically too safe to muster any urgency. On the other, you had the sense that a necessary germ of madness had been introduced, infecting the 18th century court with comic perversity and chilly danger—hence the delicious pitch of Rachel Weisz and Emma Stone as two cathartically devious aristocrats competing for the favo(u)r of Olivia Colman as a cathartically unhinged queen.

By the time its release expanded over Christmas, I got a text from my aunt asking me about the film, because she and her sisters had gone to see it and had found it “a bit odd.” This struck me as notable for two reasons: first, because calling a Lanthimos film “a bit odd” initially seemed like the polite understatement of the year; and second, because my extended family was texting me about the director of Dogtooth and The Killing of a Sacred Deer in the first place. But then, hasn’t Lanthimos been a clever courtier himself, leaping to greater opportunities, big stars, and the red meat of the English-language market? I know poor souls who even watched The Lobster with their parents, having no idea what they were getting into. So maybe “a bit odd” isn’t an understatement after all. We’re in surreal territory by any sensible standard, but by Lanthimos’s, this is among his tamest and most appealingly open films—a calculation that means something artistically as well as financially. If it’s struck gold, it did so by finding a juicy sweet spot between traditional prestige and total insanity, and then mining it exquisitely.

The film’s schema for weirdness isn’t terribly complicated: dialogue as cleverly refined as the next battle of wits, only punctuated with the word “cunt”, plus wide-angle lenses that make the 1700s pop with spastic alien energy. What elevates it is that, intertwined with all the comedic viciousness, lies an empathy for the world of female competition—and on that count, Weisz, Stone, and Colman deserve to be credited as coauthors. Colman especially: she is the heart and soul of both its satire and its longing, the seat of power and somehow the least glamorous role.

Men are there, of course: secondary comforts at best, total brutes at worst, and most often resources, obstacles, or mosquitos with erections. But the women carry their own public and private faces and their own means of moving up and down the hierarchy. Naturally, they have their own taboos to indulge as well—this is a homoerotic love story, and indeed it’s hard to imagine any other type of love being as pure within the world of the film. Even before it becomes explicit, Weisz’s domineering hold over Colman clearly has a tangle of affection mixed in. As for Stone, she’s the long-suffering interloper, experienced with the mercilessness of the bottom rung and more than ready to play her hand when forced. We don’t have to fight anymore, she says triumphantly to Weisz near the end. It registers as a peculiarly honest, brazenly optimistic, and even vulnerable sentiment, particularly given what came before. Weisz, for reasons no one could blame, rejects it, setting the stage for perhaps the saddest final act of any drama in 2018.

The Favourite‘s most valuable perversity, then, is one of its most unexpected: its tenderness. The film’s schematic pleasures would be hollow without it, or else end up in the corner with films whose contrary nature and ruthless cleverness far exceed their substance. But tenderness exists in the film, and it is expressed, exploited, guarded, and ultimately snuffed in an unnerving finale that grinds up dynamics of the heart in the dynamics of power—which is what these sorts of costume dramas generally aspire to in the first place. All this is based on real-life figures; I’m not sure how much of it comes from solid historiography, and more to the point, I’m not sure the filmmakers care. It could just as easily be set in a past dreamt up by Lubitsch or Sternberg (to pick two telling examples), and its humor, provocations, observations, betrayals, and pains would mean precisely the same. As the three leading ladies navigate Lanthimos’s own dreamt up past, rightly confident that madness can beat sanity at its own game, the most lasting impression is as classical as tragedy gets: you yearn, in vain, for some way they could have had a happy ending.

The Favourite is in select theaters now. I will, emphatically, not be going around recommending Dogtooth at the next family reunion.