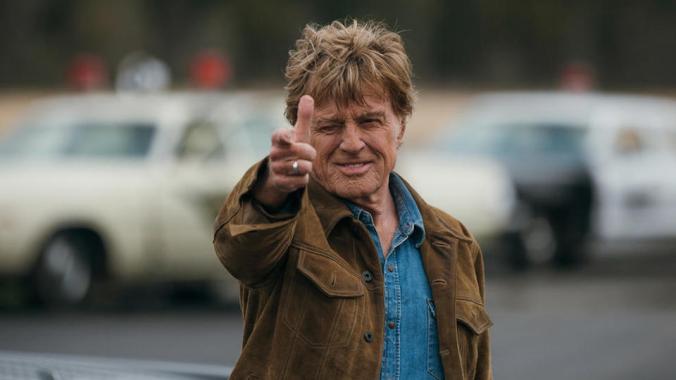 David Lowery’s last film, A Ghost Story, was about the meaning of life. His new film, The Old Man and the Gun, is about finding a farewell vehicle for Robert Redford. And any worldly movie buff might tell you that the two concepts have just as good a chance of being great cinema—just as any critic should note that the two films, for all their differences, share the same distinct air of wistfulness. With A Ghost Story, Lowery wasn’t the first director to tackle the Big Questions and be revealed as a better filmmaker than a philosopher, and its easy to peg The Old Man and the Gun as a retreat from loftier ambitions. But for warm but bittersweet comedy, Lowery does just fine, lightly eccentric and at ease with nostalgia—even if a little more ambition might have done the film some good.

In his (reportedly) last role, Redford plays a charming career bankrobber, ready to take your cash with a friendly smile and refusing to settle down in old age. One reason he’s still at it is persistence: he doesn’t need the money, he just keeps doing what he’s doing because it’s what he does. Another is that he’s working on such a small scale that the law seems to react to this old-timer more with bemusement than with any rush to turn him into public enemy #1. He never fires his gun, and even his victims, as they get over the shock of being robbed, can’t help but describe him as gentlemanly. When he meets Sissy Spacek—whose smile is, if anything, more glowing as she gets older—he’s smitten. And the question is whether he can or should go on forever, if he should retire as an ordinary man or disappear into myth.

With this material and this cast, it all falls into place rather effortlessly—too effortlessly, since it’s well into this laid-back, ramblin’ film before Lowery and company start throwing any interesting curveballs. For one, there’s the complication that, unbeknownst to Redford, he may have done more emotional damage over his career than just robbing banks. (The stakes are now raised—after all, what has a little federally-insured larceny ever meant to an audience?). Then there’s Casey Affleck as the cop who pursues him. However much of a creep Affleck has been in real life, he carries a bubble of soulfulness on screen, serving as a perfect foil for Redford because Redford seems to have discovered the secret to happiness and Affleck hasn’t yet. The steadiness with which the plot unfolds means as much as anything that happens in it. And the earnest conversations about how to keep busy past 65 surely served as a haven when the film, like a thief, snuck into a weekly box office top 10 that was otherwise being eaten alive by Venom and sliced by Halloween.

Still, I can’t help but wish The Old and the Gun were funnier, or twistier, or carried a greater sense of loss, or really were more intense on any axis on which it exists. I can see why Redford might like this as goodbye material: it’s a metaphor any movie star would be proud to call their own, and it’s infused with a self-conscious fondness for the New Hollywood of Redford’s generation. Outside Redford, or Spacek, or the fact that it takes a special kind of nostalgist to stunt-cast Keith Carradine, the main attraction of the film is the filter through which it views the world. This is the country as the more charitable side of New Hollywood cinema saw it: the cities, towns, and out-of-the-way spots of an era when “America” (or some version of it, romantic in its earthiness rather than its glamor) was enough of a subject for a movie. This one is humble, its abiding mood calm, its questions offered with such minimal insistence that they take a moment to register. It’s a movie that looks at the audience and tips its hat. I’ll tip mine back.

The Old Man and the Gun is now in theaters. Bonus Tom Waits.