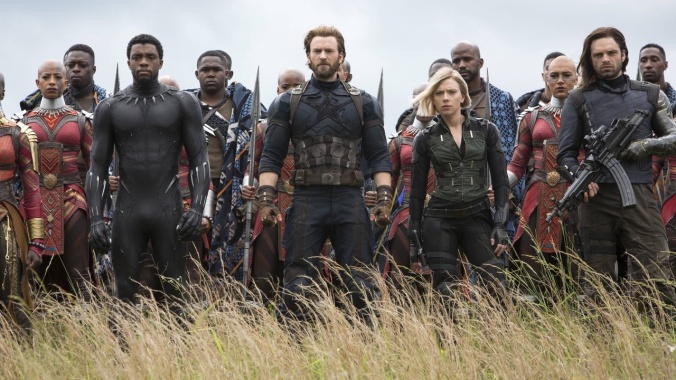 When a series regular gets killed off before the opening credits of Avengers: Infinity War, it’s a way of announcing that, whoever controls the life-or-death fates of these characters—the Russo brothers? Kevin Feige? a majority vote of Marvel’s board?—they’re not fucking around. Not that any Marvel movie would ever foreswear “fucking around” completely; another term for that might be “irreverent, riffing, self-reflexive humor”, ample amounts of which have been central to Marvel’s identity ever since they started hiring comedy directors for action movies and launched an empire on Robert Downey Jr.’s insolent charm. But what it means is that, as the climaxes pile up, Infinity War has what lesser blockbusters fail at and lazy ones don’t even attempt: a palpable sense of stakes. (A lot of movies settle for “the world”, which means less and less these days if it isn’t handled right). It’s showmanship, of course—even a non-comic-book-reader knows that superhero deaths don’t tend to be permanent, especially when they’ve already signed on for sequels. But as long as moviegoers who never quite outgrew this shit (and don’t intend to) will pay $13 to greet silliness with reverence and vice-versa, it’s good to be in the hands of showmen who are not only talented, but feel devoted to their end of the bargain.

As the culmination of one of Hollywood history’s most ambitious act of serialization, Infinity War was never going to want for scale: come see dozens of superheroes, each of them with their own history, mythology, and comic bit, in a sustained cross-cut juggling act. Iron Man and Dr. Strange will clash egos and facial hair. Half of the Guardians of the Galaxy will team up with Spider-Man, the other half with Thor. The Hulk will crash down on earth and meet Black Panther. And all of them will unite to fight the extraterrestrial demi-god Thanos (Josh Brolin) who’s been floating around the edges for a decade and has one of those existential-minded plans to commit mass murder in the name of balance.

Balance is, of course, what such a scale calls for, and the juggling act of Infinity War gamely pulls it off. For one, this is lean and tight for a two-and-half-hour film: its momentum refocuses it on the pop epic it needs be whenever you worry it might get bogged down playing the hits or turn into Marvel’s Cavalcade All-Star Revue of 2018. The comic book action and emotions have enough moment-by-moment immediacy that you’re welcome to dive in even if you’ve had too much real life between installments to clearly remember who had which magical artifact where. (The merging of filmic size and TV narrative flow continues, even as both formats balloon). The gags that write themselves are fine; the gags that don’t are better. And if it took Marvel a long time to come up with villains who are as engaging as their heroes, Brolin fits the bill and lends the necessary grave personality to movie evil.

Marvel’s peaks were never that high nor their valleys prolonged. Most of the franchise is a question of slight variations, even while the Russos’ Captain America movies got the best stories, Thor: Ragnarok was allowed to be uncommonly freaky, and Black Panther felt personal. But the tone and texture of Infinity War‘s “to be continued…” final scenes feel like something new for a series pushing twenty films. This is a film that bets, with success, that after ten years of backstories, good plots, bad plots, and plenty of fucking around, the best place to leave its audience is not the usual flashy animated end credits sequence, but a somber and portentous note. If there’s been a better cliff-hanger at the franchise-hungry multiplex in the last ten years, I haven’t seen it. So the compliment Infinity War deserves is both the finest and most basic you can give to this town’s showmen, especially those who take 150 minutes. When it was over, it left me wanting more. Here’s hoping they know how to finish.

Avengers: Infinity War is available anywhere you get your movies and all your friends have already seen it. To whom it may concern, it’s easily a much better movie than The Force Awakens.