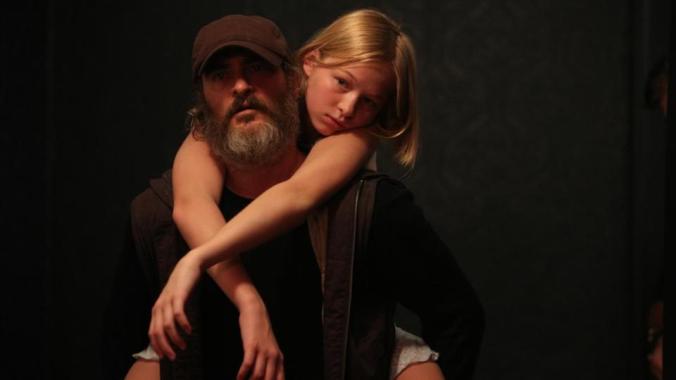 We last saw Scottish director Lynne Ramsay at a place of organized chaos: 2011’s We Need to Talk About Kevin, a deeply uncomfortable, sensory-assaulting narrative montage that dropped us directly into the head of arguably the strangest character Tilda Swinton has ever played. That Ramsay went so long without another feature was not according to plan. Rather dramatically, she quit the director’s chair of the Natalie Portman western Jane Got a Gun on the first day of production. Lawyers descended—Hollywood has chaos of its own.

With You Were Never Really Here, Ramsay returns, dialing back but not abandoning the chaos of Kevin for a lean, intense 90-minute thriller that retains her taste for haunted subjectivity. That haunted subject here is Joaquin Phoenix, starring as a bounty hunter who specializes in rescuing children from sex trafficking rings. Much of his performance lies in physical transformation: the character is part action hero and part wreck, muscle-bound but lumpen, showing a layer of flab and a paunch, his hair an uncombed tangle and his face obscured by a mangy beard. Physically, he seems fairly impervious to pain, as action heroes are. Psychologically, it’s clear that, whatever wound he hopes to heal by doing what he does, it isn’t working. But he’s good at it, and so is Ramsay. She and her team do well with the simple art of cinematic murder: the placement of a dying man, or a pair of broken glasses, or a hallway with something dreadful around the corner, is all very meticulously composed. (The plot bears surface similarities to Taxi Driver, but a more direct Scorsese link is the way Ramsay sets a scene of Joaquin Phoenix beating men with a hammer to the tune of a classic pop song).

The real question is whether the film finds an adequate social and psychological context for its action—that is, if it can transcend being an exercise in sophisticated, aestheticized violence. That question deserves an answer both passionate and ambivalent, because some of the film can fall into the arthouse trap of looking or seeming more artistic than it is. But between Phoenix keeping a low volume and Ramsay’s taste for flash cuts, it opens itself nonverbally; like the film’s troubled, introverted hero, the camera keeps catching details that echo and resonate. The coup, I think, comes in the withheld nature of the climax, which twists the conventions of a salvation-through-heroism arc both cleverly and soulfully, and suggests that perhaps genre tropes, Scorsese’s needle-drops included, are enough of a social context of their own. On those terms, it works fantastically as one of the better films of 2018—a film whose existence examines different kinds of detachment. And so it understands the multiple connotations of the title: a movie-hero covert operative, a dissociated trauma victim, and a lonely soul who, in the scheme of things, may not even make a difference. Its setting may be the dark city of film noir, but pair it on a shrewd double bill with Shane or The Searchers, and you might realize that Ramsay got to make a western after all.

You Were Never Really Here is available on home video and Amazon Prime. Cheers to their distribution arm for treating films right.