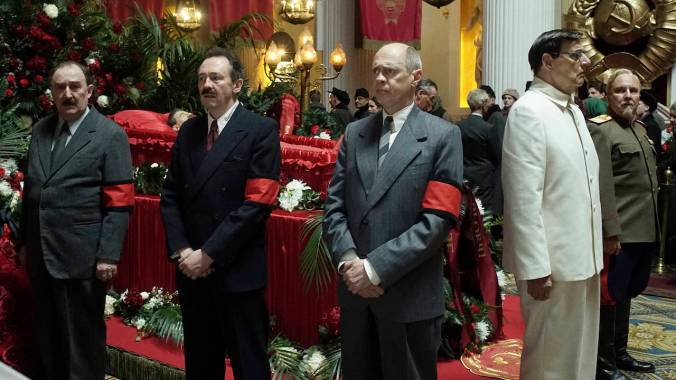 In The Death of Stalin, Steve Buscemi plays Khrushchev. He doesn’t sound like Khrushchev—he sounds like Steve Buscemi. He doesn’t look like Khrushchev—he looks like Steve Buscemi with a shaved head and a prosthetic nose. And all of this is very much to the film’s appeal. When addressing recent history, particularly real-life figures who already have sizable media footprints, a drama has to overcome that nasty, hairy thing called verisimilitude. But comedy can whack verisimilitude across the face with a rubber chicken and still get at the truth, especially if the truth is absurdity.

The director is Armando Iannucci, and anyone familiar with his previous work—BBC’s The Thick of It, its 2009 spinoff movie In the Loop, and his leap to America with HBO’s Veep—will know what to expect: a comedy set in entrenched government bureaucracy, where ships of state are manned by hapless, childish, recognizably human fools whose convictions are spotty and who can only try their best to avoid a very British kind of embarrassment. Only here, the stakes are raised, because we are in the dead center of Soviet power grabs, and such embarrassments are staged with violent round-ups going on in the background. In our own time, when anxious leftists might wonder if incipient authoritarianism is too incompetent to succeed, a pitch-black political comedy is a deliciously dangerous prospect: an uncomfortable reminder that it’s perfectly possible to trip and fall ass-backwards into a dystopia.

This makes the The Death of Stalin as disappointing as it is clever, because it is not nearly the movie it could be, especially given the talent involved. The verbal flow that never stopped crackling in In the Loop and The Thick of It has become repetitive in comparison. The style has shifted from on-the-fly, quasi-documentary chaos to the semi-ironic production values of a “serious” period piece, and it leaves the film halfway towards limbo. The comedy lacks the consistency of Iannucci’s best work, the intrigue lags far behind the banter, and the pivot from dark laughs to terror isn’t seamless, as if the film’s distance from its characters and narrative is torn between short skits and dire consequences.

What that leaves you with is a long string of nice touches, like a stock scene of two politicos conspiring as they stroll through a park, only to pass by two others doing the same; or Michael Palin giving a rambling speech that leaves a table full of yes-men teetering back and forth, confused whether he wants them to vote yay or nay. The Death of Stalin feels more sincere and well-observed in such little human absurdities than it does when the time comes to face history, and I wonder if Iannucci’s lens is best suited to a mundane republic rather than a dystopian dictatorship. In the end, I’m not sure we have anything more than we started with, not even a fully satisfying realization of the idea that authoritarian regimes, like sitcom plotlines, tend to reset back to zero after the last one has ran its course. If drama has its pitfalls, so does comedy, and satire faces the challenge of somehow acting glib and provoking engagement at the same time. Make no mistake, The Death of Stalin has barbed moments that tease and wink and bite—enough to be worth the price of admission. But I wish the frenzy of the film could match, let alone illuminate, the satire playing out in every day’s headlines.

The Death of Stalin is available to rent on iTunes, where their curators made it an Editor’s Choice. Godspeed.