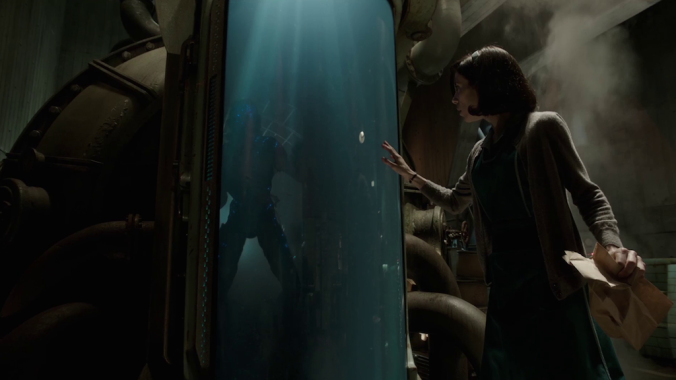 With Tim Burton fooling around and Terry Gilliam still living under a question mark, Guillermo Del Toro stakes a claim to being our finest practitioner of modern fairy tales, a director who can fade in on the world of automats and Cold War paranoia with an atmosphere that immediately and beguilingly says “once upon a time…”. So if you’re wondering what Cinderella would be doing in the early 1960s, Del Toro’s The Shape of Water has an answer: she’d be living above a grand movie theater and working as a maid at a secret government research facility. She is, as played by Sally Hawkins, a mute, and a delicate, private, and timid individual. After her G-man bosses capture what looks uncannily like the creature from the black lagoon—one of Del Toro’s favorite movie monsters—she and the creature bond as fellow outcasts, and an escape plan is hatched.

To put it mildly, Del Toro has great tenderness for cinema’s monsters, so it’s only fitting that he use one as a symbol for America’s disenfranchised communities, be they racial, sexual, or economic. That social commentary is more or less safe, tidy, and unremarkable; pointing out that America was a regressive place during the Civil Rights era is, these days, like shooting fish in a barrel. But without spoiling anything, I wonder what on Earth the studio thought of at least two sequences Del Toro devised for his silent aquatic hero, both of which double down hard on the film’s heartfelt predilections. And that gets to The Shape of Water‘s greatest strength: it so clearly comes from such an utterly singular consciousness, a cinephile mind in love with both plucky B-movie weirdness and luxuriant A-movie craft—and a mind that believes that the most pitiable monsters might be humans. Much like Cronos (1993) and The Devil’s Backbone (2001), two of Del Toro’s earlier fables, The Shape of Water is not a lean, mean suspense machine or an airtight plot. (More than once, you may find yourself marveling at how lax the security at this government facility really is). But it is laced with details, themes, characterizations, and subtle morality plays that make it linger pleasantly in the mind. As the film’s villain, Michael Shannon could fulfill his plot function simply by growling, but the scenes Del Toro includes of his personal life—the straight-society alpha male who wants everything he’s supposed to want—make his character as pathetic as he is menacing. (Both he and Hawkins spend the movie carrying a physical scar or deformity, and how each wound turns out is bizarrely poetic in its sincerity).

What results, as the film fades to black, is a risky pastiche of genres, elements, and tones, and I haven’t told you the half of them. But the film works as well as it does because, like an Old Hollywood classic that might play at Sally Hawkins’ nearby movie theater—this fairy tale’s true enchanted palace—The Shape of Water holds so purely to its convictions: that an outlandish monster can open a serious metaphor, that color should be splashed across the screen with gusto, that bedtime story logic might follow us into the world of modern genre cinema, and that the filmmakers, star, and story can unironically hurl themselves at the unexplainable in the hope of a happily-ever-after.

The Shape of Water is now playing in theaters and is nominated for Best Picture at the Golden Globes. Bless it when something this strange gets bestowed with prestige, and I hope the Academy tosses a nod to Shannon as well as Hawkins.