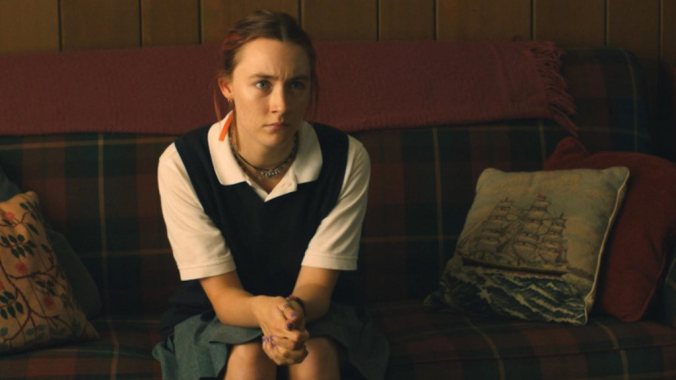 Don’t look back in anger—in fact, it may not even be possible to. That’s the main takeaway of Greta Gerwig’s semi-autobiographical and wholly delightful Lady Bird. It is a ceaselessly witty coming-of-ager, marking the directorial debut of an actress whose work—particularly as the muse/star/co-writer for Noah Baumbach—had already made her an indie darling of the 2010s. Gerwig and Baumbach’s latest films together were comedies set in the New York of so many millennial hipster dreams, to which Lady Bird is something of a prequel. We open in the suburbs of Sacramento, where a stifled, bored teenager (Saoirse Ronan) who insists on being called “Lady Bird”—her “given name” from herself to herself—dreams of leaving California and her Catholic school behind for college in New York City. The tightness of Lady Bird is part of the lost art of the 90 minute movie, which, thanks to sharp writing, gives the film plenty of time to delve into mother-daughter dynamics, the class divide at private schools, and how NorCal can be a really uncool place even when it’s trying hard not to be. (The word “hella” gets the ironically unironic line-reading it deserves).

As a comedy, it is one of the best of the year, carried by the fast dialogue and chemistry of the cast, with Ronan as the authentically spunky, back-talking teenage heroine that Juno couldn’t match in her most ostentatious dreams. But the chipper speed of Lady Bird serves another function, I think. As the film flips so quickly through the calendar year and its rites of passage—college applications, driver’s tests, school plays, identity crises, losing your virginity to a pretentious ass—it adds to the film’s air of fond, retrospective distance, as if to say that any conflicts, failures, and humiliations will turn naturally into comedy once they’ve shrunk in time. (Tellingly, the tempo only really slows down for the finale, and in a nice touch, the movie ends with its heroine in mid-breath). Oscar buzz has already begun; for those keeping score, Lady Bird was one of the ten top-grossing movies of last weekend despite playing in less than 40 theaters. Backlash will follow, I’m sure. The film telegraphs far more than it needs to, it could do more with its most distinctive ideas, and as both teen dramedy and “indie” cinema, it colors firmly inside the lines—to put it simply, there’s only so high a movie content to stick to convention can rise. But Lady Bird remains a joyful success on those terms and hopefully not the last we’ll see of Gerwig as a writer-director. It is a bittersweet farewell to the idea of a hometown: to hers, to mine, possibly to yours, and resonant for anyone who gets out only to realize that it will always be with you. For better or worse.