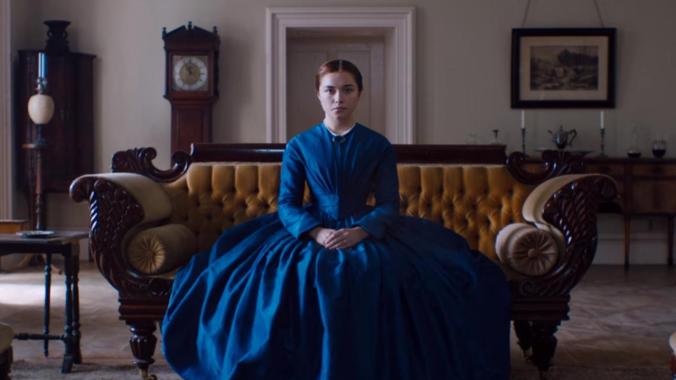 Take the label and own it. There’s already a Lilith Fair and a Jezebel.com, so why not reclaim another mythic symbol of female wickedness in the name of empowerment? At least, that’s the idea behind Lady Macbeth, a scrappy, nasty period piece that’s recently arrived from the UK. The connection to Shakespeare is purely thematic, though its heroine will at one point stare at the literal blood on her hands. The film’s thesis is simply to look you straight in the camera and say, “You think I’m not cooperative enough? That I want too much dominance? That I’m not what a woman or a wife should be? Let me show you why.” And so we follow the defiantly self-possessed Katherine (Florence Pugh) as she’s sold into marriage with a wealthy landowner. The union is loveless—in a nice evocative touch, the film holds back on showing us the man’s face for as long as it can. Her new environment is oppressive. Her husband’s sex drive is, shall we say, peculiar. So, while he is away, she takes on a lover, gets high on class-based status, and winds up in an escalating series of murders and untidy subplots.

At 89 minutes, it is murderous potboiler material stripped bare—too bare, I think, because it ends up lapsing into vagueness. To address just one fundamental question, is Katherine experiencing true romantic passion in her affair or just exercising her god-given right to casual sex? Or is an inability to distinguish the two part of the whole point? That the answer seems to shift scene by scene indicates a lack of narrative firmness: the story isn’t able to go more than skin deep, no matter how much skin it shows. We get better insight from Florence Pugh’s performance itself, in the little flickering gestures that make it clear that Katherine, like Pugh, is barely more than a teenager testing out the pros and cons of being a lady. The chief pleasures lie in the film’s corners: the sharp turns it makes, the traps it backs its characters into, and the jagged editing that connects so many static shots. It is, I would say, certainly more interesting than your average costume drama, and god knows most costume dramas could use some of the earthy rattles this film pulls off. But wonky third act mechanisms don’t help, and the coldness keeps you at arm’s length. It is as if, for an archetype that offers so many avenues for exploration, intimacy, and psychology, the film’s quest for success would give it all up in a second for pure brute force.

Lady Macbeth is available for rent on Amazon and iTunes. See it with someone you’re not sure you trust.