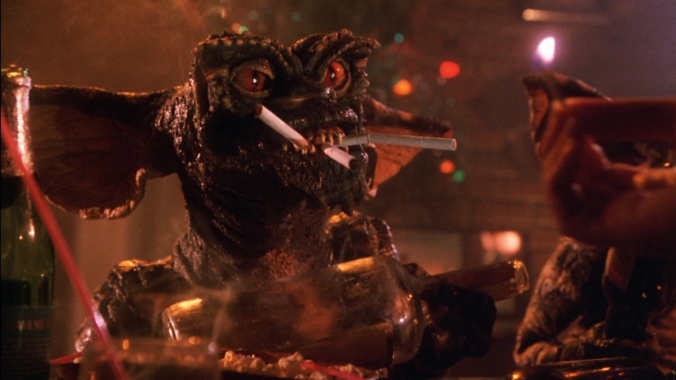 The appreciation of Gremlins (1984) director Joe Dante as a proper film artist is nothing new—Jonathan Rosenbaum, for one, has been arguing it for decades. But I do wish it were more widespread.

Gremlins, coming in the era of the “high concept” FX blockbuster, is easy enough to pitch. Just say “It’s a Wonderful Life meets The Blob“, or “it’s E.T. but evil”, and you’re in a kind of alchemical genre paradise: a mixture of Roger Corman, Steven Spielberg, Looney Tunes, and 50s monster movies, as Dante gathers as much mid-century American kitsch as he can get his hands on just so he can have fun blowing it all up. Not that the town these critters arrive in isn’t in dire need of some chaos. You know the rules, and to break them: don’t get them wet, keep them out of sunlight, and never ever feed them after midnight

The explicit references to E.T. (1982)—Spielberg was on hand as producer—are a joke the entire world is in on, but they also put Dante’s and Spielberg’s presentations of childhood in delightful and provocative contrast. It is as if the film is a riposte to all that’s tender in the Spielberg universe, arguing that for every sweet child who badly wants an imaginary friend and a complete family, there’s a half-dozen pint-sized anarchists who daydream about kicking over their school like it was made out of LEGOs. (Echoing similar remarks made by Roald Dahl and Terry Gilliam, Dante noted that the grislier moments of this “kid’s film” horrified the parents more than the children).

And so we have a horror movie for innocent kids, best appreciated when they become warped adults. Some of you may argue that the film is better for Christmas than for Halloween. The two holidays can take turns holding it, as far as I’m concerned. Come November 1st, the discounted candy and the Santa hats will be sold in the same aisle.

Halloween Countdown is an annual, personal, and highly unoriginal tradition where I write fast, extemporaneous reviews of 20 prominent but random horror movies during the month of October.