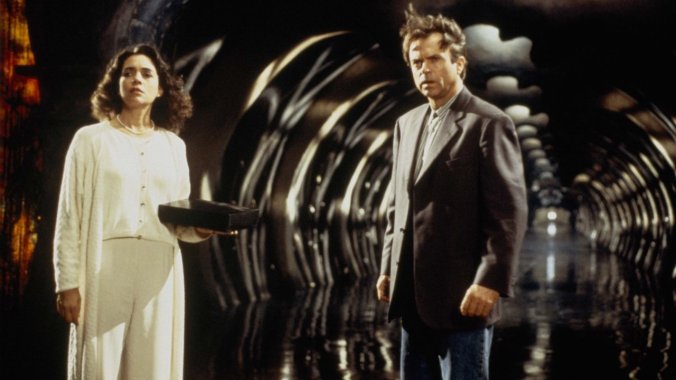 Here’s a question that can get movie buffs arguing: did John Carpenter make a truly good film after 1990? It’s a question with added relevance when the return of Stranger Things—which is part homage to Carpenter—is building hype. From the mid-70s to the late-80s, he made his mark as a unique voice in American genre cinema: The Thing (1982) and Halloween (1978), certainly, but I count a solid half dozen other cult gems of action, sci-fi, and horror with varying degrees of “classic” status.

Then the 90s came, and he started to look like a director whose context had disappeared. This is not to say there weren’t fine moments to come—if you catch me with my guard down, I’ll even have pleasant things to say about Ghosts of Mars (2001). But the latter-day film a Carpenter buff is most likely to make big claims for is this 1994 horror show: In the Mouth of Madness. The good people at the prestigious Cahiers du Cinema, suckers for genre films with meta-subtext that they are, even voted it one of the best films of the year. It follows Sam Neill as an insurance investigator looking into the disappearance of a pulp horror writer—Stephen King as H.P. Lovecraft may have imagined him—whose writing is starting to break out of its fictional confines and effect the real world. Carpenter thought of this film as the finale to his thematic “Apocalypse Trilogy”, started by The Thing and continued with the underrated Prince of Darkness (1987).

You have to care more about horror paperbacks than I do to see this all as a canny prophesy instead of an idle game. But In the Mouth of Madness does have a very intriguing idea on its side: that a well constructed work of fiction can override your reality, even when you know it’s fake. And thus the best moments of the film come when it scares you (sometimes exquisitely) while making as little sense as possible. It works as well as it does by sticking with the spirit of Lovecraft’s short stories, in which a hero tries to rationally narrate his own story while clearly going off the deep end. And per Carpenter’s standards, it leads to a bonkers final scene that reminds me of what we always loved about him: that his genre films were very un-generic.

The scariest thing may be that 1994 FX now look like they’re entering the realm of camp. I was around in ’94, and it didn’t look that way at the time. An ill omen for the future, if there ever was one.

Halloween Countdown is an annual, personal, and highly unoriginal tradition where I write fast, extemporaneous reviews of 20 prominent but random horror movies during the month of October.