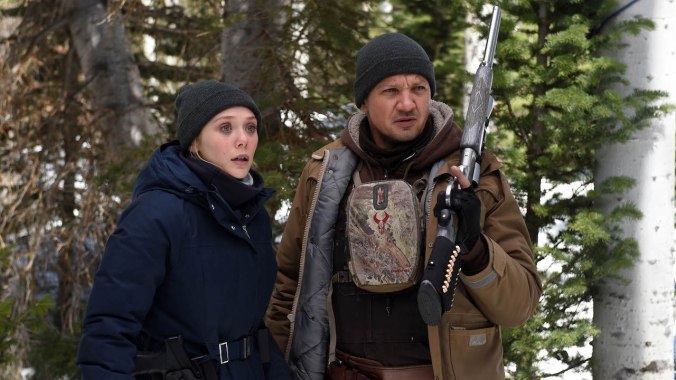 When filmmaker Taylor Sheridan was last in theaters, it was as the writer (but not director) of last year’s Oscar-nominated Hell or High Water. I didn’t shine to that film as much as some of my friends or the Academy; it was a solid western noir script, but the presentation of it felt too glossy by half. That is, for its tale of crime and punishment in the American heartland, I could never quite shake the feeling that I was watching movie stars play-acting for a camera. Wind River, his follow-up and his first time directing his own script, takes its atmosphere a step in the right direction simply by being more stark. It feels brought down to the soil, even if the soil is under three feet of snow.

Old Hollywood has its own tradition of borderland noir—Touch of Evil (1958), Ride the Pink Horse (1947), etc.—and Wind River aspires to work a twist on that fear of lawlessness by being set on America’s border with itself. Or to be more specific, an Indian reservation, with all the federal neglect that entails, where Native Americans mingle with the white inhabitants of a nearby Wyoming town, and where a local hunter (Jeremy Renner) and a green FBI agent (Elizabeth Olsen) have to solve the murder of a Native American teen, found dead in the snow miles from the nearest anything. The murder mystery itself is completely linear, but I’d wager that’s not a poverty of imagination so much as a sad-eyed interest in inevitability. Sheridan remains a fine observer of the heartland, with a good ear for dialogue, an ability to add personal nuances to characters who might otherwise fade into cliche, and a strong sense for a version of American life that’s a million miles away from the Westwood Village, where I saw the film.

There is, I think, a certain obviousness that mars the film: an obvious mystery, an obvious rape-revenge resolution, and an obvious cinematic style, limited to a few mood-setting chords and anonymous handheld photography. Sheridan has room to grow as a filmmaker, but he knows how to keep a plot clipping along, when to drop the thematic hammer, and how details can turn a corpse into more than a mere procedural. Wind River‘s interest is in different kinds of American society, where new generations make their stand on top of old legacies, and where the past should neither determine fate nor be forgotten. And on those counts, Wind River lands some inspired touches and fine climactic monologues. Its overt social conscience toward modern Native American life is undercut, or at least complicated, by the fact that the hero relied on to mete out justice is a white man, treated cinematically as a kind of cowboy and Indian rolled into one. But in one of the keener details, we see that his Native American ex-wife is raising their mixed race son on a track of upward mobility, pointed towards bigger towns with better pay and better schools. And I like to imagine they’ll be moving on while he’s content to stay. Like any good revenge story, it seems mournfully hesitant at the idea that the present can ever truly set the past right. But it’s smart enough to keep one eye cagily trained on the future.

Wind River is still haunting a few second-run theaters. You can download it legally by the end of the month.